Viruses are nanoscale pathogens containing nucleic acids that can infect all life forms such as humans, animals, bacteria, and plants. Bacteria infecting viruses are called bacteriophages or phages. Since viruses do not have their own metabolism, they depend on a host cell for reproduction. For this reason, they are not counted as living organisms.

Each virus can exist in two different forms, either inside its host cell or as independent particles called virions. Virions consist of genetic material containing information about their blueprint, and a surrounding protein envelope called a capsid. Depending on the type of nucleic acid they are made of, viruses are classified as DNA or RNA, single-stranded or double-stranded. Some virions also possess a lipid bilayer membrane called an envelope. The origin of this envelope is a membrane of its host cell. For example, the HI virus (the causative agent of AIDS) or SARS-CoV-2 are enveloped viruses.

The morphology of virions varies greatly. Their size varies between 15 – 30 nm for small viruses like Circoviridae and 400 – 500 nm for the large giant viruses. Because of their size range, they can be perfectly measured by NTA. Their shape is determined by their protein coat and can be spherical, but also helical, spherical or isometrical.

The life cycle of viruses is independent of the origin of their host cell. The virion binds to a surface protein of a host cell and then introduces its nucleic acids into the cell. This can be done either by endocytosis or by injection. Then the host cell is forced to produce a high number of copies of the viral genome and its capsid proteins. The resulting newly synthesized virions leave the cell either by lysis of the host cell or are actively released by budding, which is typical for enveloped viruses. Some viruses integrate their genome into the host cells genome and are thereby replicated with every reproduction of the host cell. Normally, they stay silent until activated by an impulse, often thermal.

Viruses are responsible for a high number of different diseases. In humans, some prominent examples are COVID-19, hepatitis, AIDS or Ebola.

Not every viral infection causes a disease. If the immune system is able to recognize and fight the pathogen due to vaccination or previous infection, a disease is avoided. However, because viruses lack an effective proof-reading strategy for their nucleic acid replication in the host cell, they have a high mutation rate. The resulting strains of a virus are often not recognized by the immune cells and can therefore cause a disease. This high mutation rate leads to a finely tuned adaptation to the host and can cause a jump to another species, such as from animals to humans, known as zoonosis. For example, the HI virus was first discovered in monkeys and most likely adapted to humans as hosts by eating infected meat.

The better the adaptation of the virus to its host, the lower the mortality, since the virus is dependent on its host. Therefore, coexistence of the virus with its host can be achieved, often with little or no symptoms. A typical example of a well-adapted virus is the herpes simplex virus, which has an infection rate of 65 – 90 % in adults worldwide and cannot be cleared by the immune system after a first infection. Herpes simplex infection shows mild symptoms from time to time when the immune system is weakened, but can cause severe symptoms in immunocompromised persons.

Viruses are also responsible for about 17% of all human cancer cases. The so-called oncoviruses responsible for this lead to uncontrolled cellular growth by altering intracellular signalling pathways, which causes cancer. A well-known example is the hepatitis B virus causing hepatocarcinoma or the human papillomavirus, which causes cervical cancer, for example.
Virologists are working to understand the host-virus-relationship and unravel the mechanisms of the immune response to a viral attack. Therefore, they need efficient methods to quantify the viral load, or titer required to cause an infection. One common method is the so-called plaque assay, in which different dilutions of virions are added to a monolayer of cultured cells. Due to the cytopathic effect of the viral infection, the cells become lysed, which is visible as colourless holes after a staining the cell monolayer. As a result, the number of plaque forming units (PFU) can be determined and is expressed as PFU/ml. (Bild plaque assay) 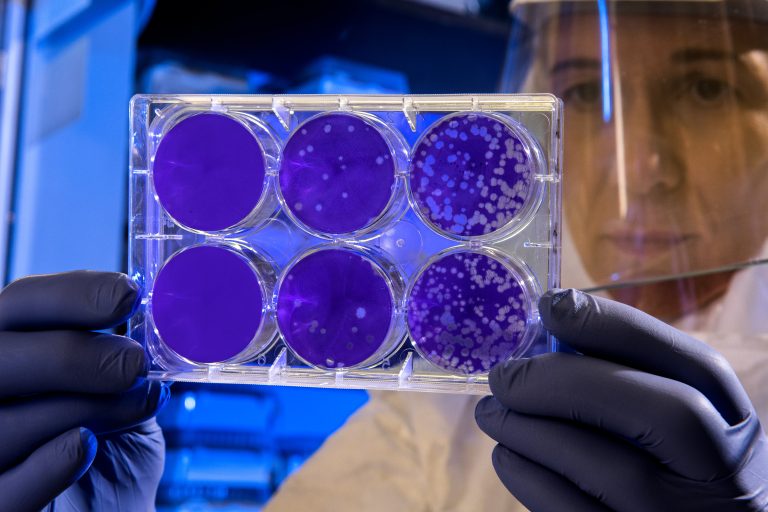 As an alternative test, the Median Tissue Culture Infectious Dose assay (TCID50) can be performed. In this assay, several varying concentrations of virions are added to a cell monolayer. After a defined time, the plates are examined for cytopathic effects of cell death. The concentration that results in 50% cytopathic effects is defined as TCID50 and is expressed as TCID50/ml.
You can read a comparison of both methods here.

Both methods lack the ability to quantify the total concentration of virions as they only indicate infections, but not particles. Therefore, the NTA technique is an important addition to the established methods. Virions can be quantified within a few minutes. An advantage of the NTA technique is that it can also measure the non-infectious fraction, which gives a more reliable result for the replication rate of a virus.

By using fluorescent NTA (F-NTA), defined virions can be stained and thus identified from complex samples such as patient material. Alternatively, F-NTA can be used to analyse the amount of successfully loaded (nucleic acid-containing) virions.

Since particle size can be measured with NTA, viral aggregation, which alters viral behaviour, can also be visualized.

In addition to their pathogenic effect, viruses are also used for therapeutic purposes. For example, viruses can be used as vehicles for transporting genetic material into target cells. These viral vectors have been known to the public since the Corona pandemic, when viral vector vaccines directed against SARS-CoV-2 were invented. They transport the DNA or RNA of a pathogen into the target cell, where a protein is expressed which is then recognized by the immune system. Thereby the immune system is trained and able to prevent an infection by this pathogen afterwards.

Beyond their use as vaccines, viral vectors can also be used for gene therapy. This involves curing hereditary diseases by replacing the dysfunctional gene with a working one. However, since these approaches show undesirable side effects, their use has so far been limited to research and clinical trials.

Viruses are known to cause cancer, but they can also cure cancer. These healing viruses are called oncolytic viruses and have diverse mechanisms to fight tumor cells. Some oncolytic viruses kill tumor cells directly by lysis. Others support the immune system to react against tumor cells, which results in suppressed tumour growth or even tumor shrinkage. Or they induce tumor suppressor genes in cancer cells, which reduces or stops tumor growth. This so-called oncolytic cancer therapy is the subject of numerous clinical studies.

The oldest medical use of viruses is phage therapy, in which bacteriophages are used to cure bacterial infections. It was invented as early as 1915 by Frederick Twort. After the invention of antibiotics, phage therapy became less interesting although it has some interesting advantages. It is very specific and therefore has fewer side effects compared to antibiotics. However, the interest in phage therapy is rising due to the increase in antibiotic resistance.

NTA is a common technique to ensure the quality of production of all these viral therapeutics.

Publications related to research on viruses

The Journal of Infectuos Diseases

For more information on the ZetaView® or to discuss your requirements, please contact us.